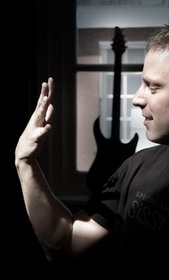 * Has been playing guitar professionally for over 40 years and has recorded and/or played with Scott Henderson, Frank Gambale, Scott Kinsey, Dan Gilbert, Carl Verheyen, Michael Angelo Batio, Marco Minnemann, Steve Hunt, Allan Holdsworth, Shawn Lane, Brett Garsed, Gary Husband, Jimmy Johnson, Derek Sherinian, Carl Verheyen, Kiko Loureiro, Greg Howe, Guthrie Govan, Virgil Donat, Dweezil Zappa, Eric Gales, a.o.;
* Started playing at age 10 and at age 17, started his studies at the Royal Conservatory in Amsterdam for 6 years, graduated with a ’10’ and studied for a year at GIT in Los Angeles in 1994;
* While in LA., recorded the fusion classic ‘Generator’ (first titled ‘Truth In Shredding II’ by Mark Varney) for Mark Varney’s legendary Legato Label at age 22. That cd also featured Scott Henderson, Frank Gambale, Carl Verheyen, Scott Kinsey;
* Performed two years in a row (2010 and 2011) at the Ziua Chitarelor Festival in Bucharest with Andy Timmons, Greg Howe, Guthrie Govan, Brett Garsed, Mattias Eklundh;
* Taught and performed live with Allan Holdsworth and Kiko Loureiro at the ESC 2011 festival in Sicily, Italy;
* 4th price winner of the wordwide Yamaha Band Explosion contest at the Budokan Hall in Tokyo, Japan in 1989;
* In 1993, out of 350 entries, Richard became the 2nd price winner of the Ibanez Guitar Award at the finale in Ahoy, Rotterdam;
* In 2010, Richard headlined the ‘Meeting Of The Spirits’ festival in Leewarden, Holland together with Greg Howe and Carl Verheyen;
* Richard has performed on the Weaveworld trilogy from keyboard prodigy Lalle Larsson (ranking #3 best keyboardist in 2011 Keyboardmagazine polls);
* Richard has done three tours throughout Holland and Germany in 2011 and 2012 with Guthrie Govan and Jose de Castro as a ‘rock-blues-fusion G3’ project;
* Released three instructional DVD’s for TrueFire: ‘Scale Creativity’, ‘Chord Creativity’ and ‘Creative Lick Phrasing’;
* Teaches harmony, theory, guitar, bandcoaching at Tune Up music school in Haarlem;
* Was invited three times by Dweezil Zappa to join him onstage during his European tours, twice in a sold out Melkweg,       Amsterdam (2013 and 2015) and once at a sold out Tivoli, Utrecht (2019)
* Voted ‘Guitarist Of The Year’ in two different categories (best ‘overall’ and best ‘jazz-fusion’) for 5 years in a row by Guitarist Magazine, earning him the ‘Gitarist Of The Year 2021’ award.
* Also voted ‘Guitarist of The Year 2022’ by Gitarist Magazine the next year, by being voted #1 in all categories again.
* Performed live with Scott Henderson and Frank Gambale at the ‘Best Of Jazz-Rock And Fusion’ event, at Boerderij, Zoetermeer, March 12, 2022.
* Performed an ode to Chuck Berry on national tv for 1.6 million viewers on 22 October 2022 , playing Johnny B. Goode with the Sven Hammond Big Band. 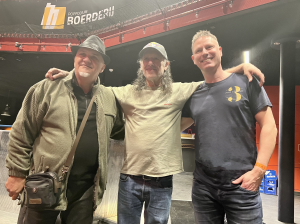 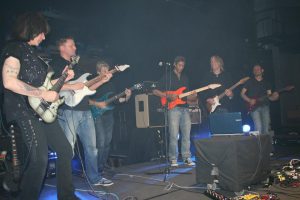 Born august 2, 1974 in Amsterdam, Netherlands, Richard Hallebeek started playing guitar at age 10 and took lessons from local teachers. He formed some local bands and started performing in various jazz and rock groups already at age 12. Completely emerging himself in music as a total guitar-nerd, influences early on were The Beatles, Pat Martino, Allan Holdsworth, Weather Report, Charlie Parker, Eddie van Halen, Pat Metheny, the radio and every album he could get his hands on at the local library. Already at the age of 17 he was the youngest guitar player ever to be submitted to the Hilversum Conservatory, a conservatory best known for it’s strong jazz history drawing musician’s from all over Europe. Richard studied with jazz legend Wim Overgaauw and graduates with a master’s degree and a ’10’ grade after a 6-year study of jazz, composition and improvisation.

After his graduation, in 1989 Richard joins his first pop group called ‘What A Gig’. Soon after he joins the band, they become the winner of the Dutch ‘Yamaha Band Explosion’ contest. The Yamaha Band Explosion is a world wide talent search for bands writing their own songs. The grand finale was held summer 1989 at the Budokan Hall, Japan, Tokyo. In the jury were a.o. Bon Jovi, Europe singer Joey Tempest and Casiopea guitarist Issei Noro. Hallebeek and his band finished fourth with their song “Question of Love’ and they join Jon Bon Jovi for the encore onstage, together playing The Beatles classic ‘Get Back’.

In 1993 Richard was chosen out of more then 350 entries to take part in the International Ibanez Guitar Award with 8 other players to fight for the title of ‘Best All Round Player’. The finale took place in Ahoy, Rotterdam and in the jury were a.o. Alex Skolnick (Testament) and Dutch session ace Lex Bolderdijk. Performing the Jazz Standard ‘Road Song’, the Rock Classic ‘After Midnight’ in an ‘all instrumental’ version and playing an unaccompanied solo, Hallebeek became the second price winner and took home the 2nd price; a little 15 W amp and practised some more. 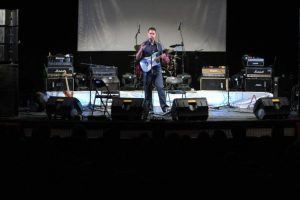 Besides practising, in the ’90’s Richard plays steady gigs in a variety of different coverbands, he teaches and does countless sessions and studiowork for radio, movies, commercials, (Dutch PTT Phonecompany, Hooghoudt, Region Police, Fokker, etc. etc.) and TV.
In 1994 he receives a scholarship for a foreign study from The Prins Bernhard Fonds. At the end of ’94 he leaves to Los Angeles for a one year study at the Musician’s Institute to study arranging, composition and improvisation. He studies guitar with Scott Henderson, Dan Gilbert, TJ Helmerich and Brett Garsed, a.o. He graduates after a year with an honors degree.

It’s at his new home at Orchid Avenue, Hollywood, where things start taking off. Besides playing over a lot of changes, Richard starts doing a weekly performance at the Musician’s Institute P-100 concert room with various musician’s at first, but later notably with Jan Fabricky on drums and J.Kleutgens on bass, with their band ‘Plus Tax’. Their goal is to write strong material, while still staying true to their guitar roots and leaving a lot of room for improvisation. With their music ranging from rock, fusion, jazz to pop and heavy riffs they gain quite a following at their weekly perfomances at the school and also throughout L.A. They continue to perform all year and end up recording their first album in the M.I. studio, (now known as ‘Tommy Tedesco’ studios where numerous artists have recorded CD’s since the first recordings of Richard and ‘Plus Tax’) which was an initiative from engineer and eight finger tapping guitar wonder TJ Helmerich. Some players who stop by to jam at those recording dates are Scott Henderson, M.I. teacher Dan Gilbert, Carl Verheyen and Frank Gambale. 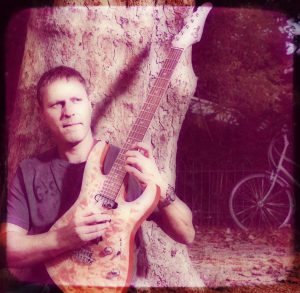 At the end of ’94, Richard gets a phonecall from guitar guru Mark Varney well know for his monthly ‘Spotlight Column’ in Guitar Player and his Legato Records label who had featured so many great players Richard was heavily into before moving to L.A. Mark had heard some rumors about a legato player combining hybrid picking and was interested in hearing some music.

At the beginning of ’95 Richard signs a four album contract with the Legato label and Mark Varney. The first CD ‘Generator‘ was released in November ’96. Featured on that album are also Scott Henderson, (Chick Corea, Joe Zawinul) Frank Gambale, Dan Gilbert, Scott Kinsey (Keyboardist from Tribal Tech) and Carl Verheyen (Probably the most recorded guitarist in L.A session history.)

In ’96 after returning back to Amsterdam, Holland, ‘True Colors’, from Richard’s rock group Maximum Brain Disfunktion is printed in a small quantity and sold at local gigs around Holland.
Rich also starts gigging around with drummer René Engel, probably best known for his CD project ‘Jazz Sick’ with Mike Stern and Danny Gottlieb.

In ’98 and 2000, Richard tours Finland, Germany and Holland with a local band to support the ‘Generator’ cd.

In march ’98 Rene Engel’s ‘Spheres of Samarkand’ is released with lots of guitar work from Richard. Featured on that CD are also: Jeroen de Rijk (Mezzoforte) and Nippy Noya (percussion). In 2002 Rene Engel’s ‘Nostalgia’ is released which further showcased the style of Richard. 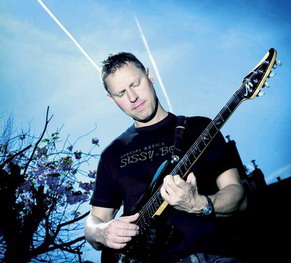 Richard starts writing for the Dutch music magazine ‘Music Maker’ as a reviewer, tests new gear and interviews some of his favorite guitarists, sometimes twice. Most of these interviews are printed on this website under the tab ‘interviews’.The beginning of 2000 brings a welcome distraction from the usual: Richard plays a 6 month tour in theatres, playing 6 nights a week, performing 145 gigs of Händel’s classical masterpiece ‘The Young Messiah’ throughout Holland, Germany and Belgium.

Besides being a much in demand sideman, in 2003 Rich thinks it’s about time to do it his way, all the way. He initiates the Richard Hallebeek Project (later known as RHP) and gets help from some of his musical friends: Shawn Lane who spent a lot of time in Holland, in The Hague and whom Richard took lessons from, and Brett Garsed both contribute four solos. The band consists of a few of Richard’s new musical friends,  Swedish keyboard virtuoso Lale Larson contributes songs for the RHP cd and are heavily involved in the creative process, making it more of a band effort. Within a month after it’s release on the new guitar oriented U.K. Liquid Note Records label, RHP tops guitar9.com being the best selling and most popular fusion album and the album gets great reviews through out the world. RHP maintains a steady seller to this day throughout the world.

At the end of 2010, Richard headlined the ‘Meeting Of The Spirits’ festival in Leeuwarden, Holland together with Greg Howe and Carl Verheyen. Richard also plays on more releases from Liquid Note Records: the two collection albums Alchemists I and II both feature Richard with different musicians, the last cd with drummer Marco Minnemann. 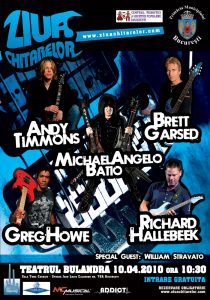 In 2008, Richard plays an 8-month, mostly 5 evenings per week, tour in theatres of 180 shows of his favorite musical HAIR, with a 32-piece cast throughout Holland, Belgium and Germany.
Between the HAIR story and the hippies, he writes and records ‘Go For It’ together with trumpet legend Randy Brecker. 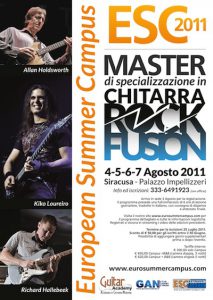 In 2011, Richard plays the ESC (European Summer Campus) guitar festival in Sicily with none other then Allan Holdsworth
and Kiko Loureiro. The three teach for 4 days and end up onstage together more then once.

Over the past years, Richard has done three tours with Guthrie Govan and Jose de Castro in 2009, 2010 and 2011 in Holland and Germany,
the hugely attended gigs proving that instrumental guitar music is very much alive. Besides that, he maintains a role as
a guestteacher at the different Dutch conservatories where he explains his way of looking at scales, breaking them up
and improvising through changes. 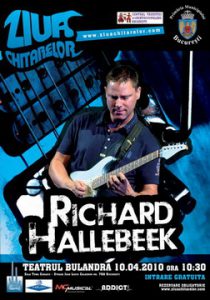 In 2011 Richard starts his own label *Richie Rich Music* to be able to release his own music in the future. RHPII was the first release on january 5th, 2013 and featured some of the guitarists Richard has shared the stage with over the past years: Greg Howe, Guthrie Govan, Andy Timmons, Alex Machacek, Kiko Loureiro, Jose de Castro, Randy Brecker and Eric Gales, all join Richard on this fusion-fest that also features Lalle Larsson on keys. The next two releases for 2013 on Richie Rich Music were the re-release of the classic 1995 release ‘Generator‘ (with Scott Henderson, Carl Verheyen, Dan Gilbert, Scott Kinsey and Frank Gambalei), which was originally released by Mark Varney on his Legato label. The remastered version of the 2004 release ‘RHP’, including a bonus track was released may 2014.

In 2022, Richard performs an ode to Chuck Berry on national tv for 1.6 million viewers, playing Johnny B. Goode with the Sven Hammond Big Band.

There have been interviews and reviews with and about Richard in the ‘Guitarist‘ and the Dutch ‘Music Maker‘, American ‘Guitar World‘ and ‘Jazz Times‘ and the Japanese ‘Young Guitar‘ and the Italian ‘Axe‘ and Richard was on the cover of Polish ‘Gitarzysta‘. Recently, Richard was on the cover of Dutch ‘Gitarist‘ magazine, being chosen ‘best Guitarist’ in two categories for 5 years in a row.
Richard Hallebeek released his custom signature guitar the RH-1 through Haar Guitars, uses, HOOK amps and speaker cabinets, TC Electronics and Fractal Audio Systems FXIII.